David Copeland (Beast Mode Soccer): “It’s great when you see that a player has greatness in them, but it´s even better when you see them work their ass off to achieve that greatness” 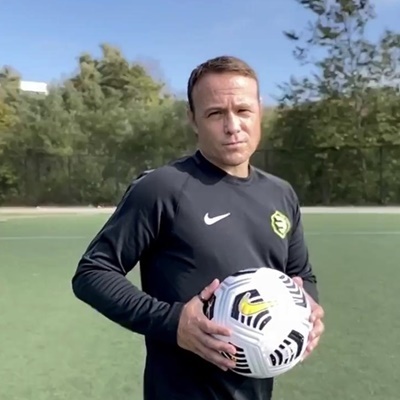 “Beast Mode Soccer” helps players to achieve their goals within soccer (whether they are beginner or professional players) with all the tools or knowledge they need.

David Copeland Smith (personal trainer and founder of Beast Mode Soccer) has been involved in this project for 9 years and has extensive experience.

Many former and current Top Pro players worked with him, and still do, as it is the case of: Alex Morgan, Rachel Daly, Mallory Pugh, Kristie Mewis … (top players whose expectations were successfully achieved by BMS methods).

We talked to David,

C: Hi David! you are the founder of “Beast Mode Soccer” (CEO of technical development). For those who do not know you, especially in other countries, what does your work consist of?

David: Hey Claudia! First thanks for interviewing me. I work with individual players as a technical development specialist. Basically, I add to players games.

C: What is your most remarkable training and experience?

David: Honestly I have so many that it’s difficult to just choose one, but I will try. I work with a player called Rachel Daly. She came to the United States to go to college and I have been working with her since then. She was good, but I knew that she could be world class, if guided the right way. Each summer she would come to Los Angeles to play in a summer league (coached by the incredible Tracey Kevins) and train. We set goals, worked hard, achieved goals and started again. The remarkable part is actually two parts. The first one was watching her turn professional for the Houston Dash (and scoring an absolute banger on her debut), and the second was watching her make her first start for the England National Team and scoring a goal. It’s great when you see that a player has greatness in them, but its even better when you see them work their ass off to achieve that greatness.

C: Endurance, strength and movement, Are they perhaps the three most important words in training?

David: To me, football is about mastering two parts of the game:

2. The ability to exploit that space.

I would argue that technique and the ability to use skill in a game is more important that strength. If a strong player cannot control a ball, then are they a soccer player?

C: After so many years helping to improve the players with their purposes. Do you want to share a story that has been successful?

David: I feel like one of my favorite stories right now is Kristie Mewis. I started working with her a few years ago. We planned out the way we would like her career to go, started to train, and see big results on the pitch. Kristie was a good player before I started working with her, but her career had stalled somewhat. She had been called into the National Team before but was played out of position, and kind of just coasted along for a while. I started to work with her when she joined the Houston Dash, and I remember the first session I did with her, I was actually blown away by how good she was, but I was also confused as to why I had never seen her perform like this in games. So fast forward, she had a great season, was dominating on the field and then she tore her ACL, which was heart breaking. This is where a lot of stories would end. Tearing your ACL often impacts players careers in a negative way. Kristies attitude throughout surgery, then recovery, then hitting the field training has been nothing short of remarkable, and she is now playing the best football of her career. It’s an important story to share, because it shows how important having a strong mental mindset is when it comes to injuries and self belief. It is my hope that we will see her on the United States National Team again!

C: A great story without a doubt. It is true that injuries are bad, a player often goes down with morale, that’s why mentality is everything and keep fighting. Do you use a philosophy that inspires you to train?

David: I have always used a philosophy from Japan called ‘Kaizen’ which is the art of continuous improvement in everything that you do. I use that for myself personally, my business, my app ‘My Soccer Training’ and of course, all the players that I work with!

C: You work with a lot of young players and you watch them develop. Do you think soccer camps play an important role in this development?

David: It really depends on which soccer camp. There are so many camps out there. Some of them are more fun based, some of them are more seriously based on development. Are the camps designed to manage the players work load etc? With the camps that we run, they are very focused on long term development. We work with the players for a week, but leave them with a long term training plan. It’s great to go back to these locations year after year and see which players have been serious about their football because you can see the development on the field.

C: Many professional players as players of the United States women’s soccer team have passed through your hands. Now they have triumphed. Are you proud of that evolution?

David: Yes, absolutely! When I look at the squads that have won the last two World Cups, and see how many of those players that I have worked with, I am massively humbled to have been a part of their journey. It would be hard for me to deny the immense sense of pride I feel every time one of our players puts on their National Team jersey, but as I told the players after last years World Cup triumph… Now we start again!

C: For example, I see Alex Morgan training, even being pregnant until the last moment and that makes me think that she is a “hard-working, fighter and with an overcoming mentality” player, is incredible. You who have worked with her will know better than me. What do you like about the way Alex works?

David: Alex is an absolute warrior. She is “ALWAYS” trying to improve. The first thing she said to me after the World Cup win was ‘ok, time to focus on the Olympics’… that was the night that they had just won the World Cup. Honestly shes easy to work with, but all of our sessions are very detailed and built out specifically to add to her game and keep making her a better player. It was funny when she was pregnant because I posted some clips on social as I always do when we train. I genuinely did not think it was a big deal, but one of the videos went viral because people couldn’t believe that she was training that hard at 7/8 months pregnant, but thats who she is, always wanting to improve.

C: What kind of people do you think would need someone like you (Beast mode soccer)?

David: Players who come to me are players who have the desire to be the absolute best that they can be. That may mean playing college, professionally, internationally etc, its different for everyone. With our app and digital programs, they attract players who want to get that ‘edge’ on the competition. We are genuinely not about social media videos, we are all about improving players.

C: Do you see some concepts that are more difficult for the players to internalize and then take them to the games?

David: With my training, the biggest hurdle is instilling the self belief to try new things in the game. There is a process that we have players follow which is to master the moves in our sessions, take them to their team training sessions and practice them in that environment and then try them in real games. Once a player successfully executes a movement that we have been working on, they then know it works and its no longer an issue, but to get the initial belief in their ability to execute that movement is the hardest thing.

C: David, Do you have any anecdote that you want to share with us?

David: So I still find it somewhat strange when people recognize me and want pictures etc. it only ever happens at soccer events, but i still think its really funny, after all, I’m a soccer trainer, not a famous player. I went to Lyon for the World Cup semi finals and the final. The first day I got there, I went to find a coffee shop, and saw some people looking at me, and they came and asked for a picture (which I must say is always amazing to know that they know the work that I do), then I get a tap on the shoulder and a woman asks ‘can we get a picture with you as well…’ I turn around, it’s Alex Morgan, Allie Long and Kelley O’Hara, all of which I have trained for almost 10 years, and just happened to be going to the same coffee shop (laughs).

C: To finish, what is your highest recommendation or advice?

David: My best piece of advice would be for the player to take ownership over their technical development.

The system is easy:

1. Analyze your own game.

Everybody says they want to be great until they figure out it takes a huge amount of work. Be different and make the most of your ability!

C: Fantastic! noted! thank you David for dedicating a space for me.
From here I will take the opportunity to tell those players who want to improve or be professionals to get in touch with you, you are good professionals “Beast Mode Soccer”.

This website uses cookies to improve your experience while you navigate through the website. Out of these cookies, the cookies that are categorized as necessary are stored on your browser as they are essential for the working of basic functionalities of the website. We also use third-party cookies that help us analyze and understand how you use this website. These cookies will be stored in your browser only with your consent. You also have the option to opt-out of these cookies. But opting out of some of these cookies may have an effect on your browsing experience.
Necessary Siempre activado
Necessary cookies are absolutely essential for the website to function properly. This category only includes cookies that ensures basic functionalities and security features of the website. These cookies do not store any personal information.
Non-necessary
Any cookies that may not be particularly necessary for the website to function and is used specifically to collect user personal data via analytics, ads, other embedded contents are termed as non-necessary cookies. It is mandatory to procure user consent prior to running these cookies on your website.
GUARDAR Y ACEPTAR